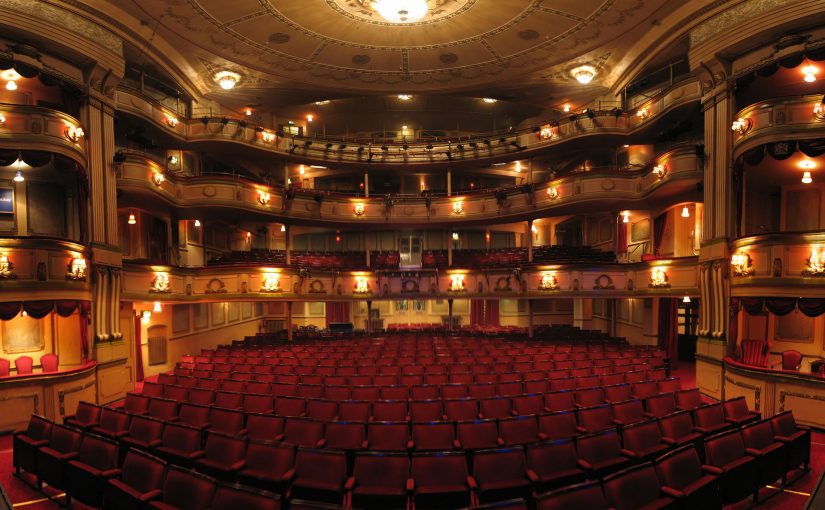 As I have discovered, if you search for information on how to apply video projection in a theatre context, there’s not a lot of stuff out there. To be clear, I’m talking about live performance theatre, not movie theatres … because for the latter it’s pretty clear that projection is a major part of the whole thing. In the spirit of sharing a little, but also to put my own thoughts into some form of order, I’m going to write a few articles on what I’ve found, and some ideas of how to apply video projection to amateur theatre productions.

For the most part I’m going to gloss over the costs; although they are critically important in theatre, especially amateur theatre, they are not nearly as interesting as the technical bits.

So, what are the challenges that crop up when trying to use video on stage? Well, they are certainly more numerous than pretty much all other cases where you’d want to use a projector.

In a cinema, the projector has an almost guaranteed clear path to the screen, unless some irritating person decides they want to draw the ire of everyone else. This is important to the enjoyment of the film, which the director has intended you to see the entire field of.

In a business or educational setting, you might have one or two people move into the beam as they explain their point or flail their arms around to make it seem more exciting than it really is. However since this typically involves slides of static text and imagery, there’s no real loss and the illumination of the suboptimal screen provided by the bodies which invade the light is generally not distracting.

Stages tend to be busy places, which are already challenging from a static lighting perspective before you consider including video projection. You may well have multiple performers. Those performers could very well need to make full use of a probably limited amount of space. Asking them to keep to one side or the other of a front-projected beam isn’t a realistic option – it can be difficult enough to ask the talent to find the light that they are supposed to be in. Similarly, as the projection spreads to reach the ground, there’d be a zone where the projected rays are unavoidable short of laying prone – that exclusion zone could be a major loss of acting space on small or medium sized stages.

Actors aren’t the only obstacle – the set itself creates a problem, in combination with whatever rigging infrastructure is available. Take, for example, a set consisting of 4 vertical flats adjoining the wings at 2 depths on the stage, plus a cyclorama onto which one wishes to project an image to fill. Depending on the size and position of those flats, they may well prevent a single FoH-positioned projector from being able to ‘see’ the full projection screen area. The audience, however, can see behind the flats into areas that would thus be in shadow.

This is also assuming you have a traditional stage behind a Proscenium Arch… if you have a thrust stage or are performing in-the-round then the obstruction issues can multiply.

Don’t forget props, too. Static ones at least can be relied upon to be in the right location, but movable ones may end up in multiple different places in the same performance.

Unless you’re working on a really artsy show where extremely minimal lighting is employed (like a hand torch), stage lighting is going to be competing against projected images.

Regardless of whether it’s a profile spot, a pool from a defocussed fresnel, or an even wash from a flood, it’s very likely to be much brighter than any projected image in the vicinity.

Stage lanternry has the advantages that focus isn’t critical and the only things likely to be in the beam path are simple lenses, gels and possibly a gobo. Passive cooling is normally enough to keep everything from failing.

Digital projectors, on the other hand, must operate at lower power levels (for comparative sizes) and have active cooling to prevent the active electronics and light handling (be it LCD or DLP) components from withering. The end result is that their light output is massively reduced compared to basic lanterns of the same physical volume.

Light from stage lighting can reflect off surfaces, leak from the lanterns, or directly hit the projection surface. This light reduces the effective contrast of any video image projected onto affected surfaces, resulting in the image appearing ‘washed out’. Leaking light from the projectors themselves can also be an issue, which can be seen in a blackout where the lamps in the projectors are still on.

Brighter projectors, in particular those that have a chance of competing against stage lighting, are large. Space is often a very scarce resource, especially in smaller theatres such as the one I work in.

Projectors with higher lumen outputs have greater cooling requirements, needing larger fans to shift greater volumes of air across the lamp(s). In a cinema, the projector can be isolated in a separate room with air handling ducts installed specifically for the projection equipment. In general there is no such luxury when using projectors on stage, especially when there may be several employed across multiple angles.

Even the most complex multi-channel, moving-head lanterns require only low-bandwidth DMX or IP-based equivalent to provide control. Older traditional static incandescent lanterns only require power. Video projection, on the other hand, requires high-bandwidth wiring for video, plus power and possibly IP networking too. Video transmission over long distances can quickly get both technically challenging and expensive.

Different projectors have differing focussing abilities, and the focal depth will vary depending on the focal distance. If you have multiple flats at differing depth on the stage and were to use a single projector to cover them all, you may well end up with some of the projected imagery in focus and the majority not. The same applies when projecting from an extreme angle.

If you aren’t projecting perfectly flat and square with respect to the projection surface, the resulting image will appear distorted. If you are projecting onto non-flat surfaces then the distortion will be acute, and possibly not linear.

Over the next few articles, I hope to cover what can be done to mitigate these issues through hardware and software.

Please note that some of the ideas in following articles are as yet untested. Feedback on these articles is most welcome, please leave it in the comments below.

2 thoughts on “Projection in Theatre – The Challenges”