Boron has been running Fedora since it was intitally built several years ago. It has suffered from frequent problems all the time it has been in use, and recently I gave up and have gone for something more solid and stable – Ubuntu.

END_OF_DOCUMENT_TOKEN_TO_BE_REPLACED 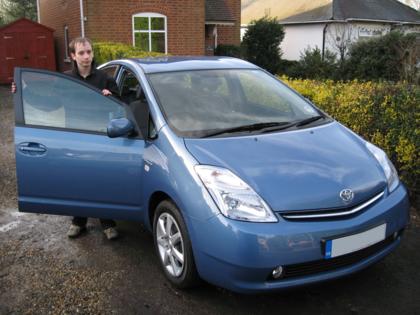 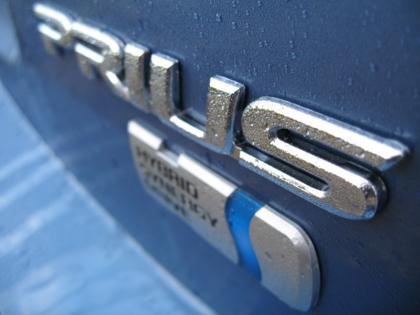 After finding out that the two tuner cards I already have are too large to fit in the new Camulus case of the new MythTV master backend (aka sodium), I ordered a Nova-T 500 dual-tuner PCI card. This was a little risky because Hauppauge produced a limited run of cards for the UK that are not compatible with linux. These cards are normally identified by their model number and certain stickers on the box.

END_OF_DOCUMENT_TOKEN_TO_BE_REPLACED

I received yet more odd looks and comments at work when a few weeks ago I received a delivery of 24 foam tiles. I ordered them from eBay as an experiment in trying to reduce the amount of noise eminating from the rack cabinet. At about £30 it was a bit of a gamble. 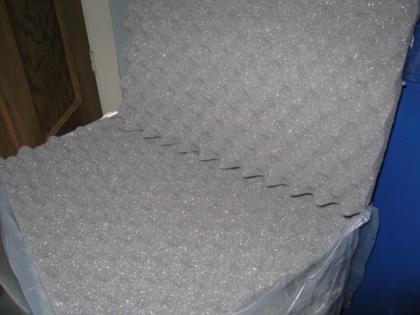 END_OF_DOCUMENT_TOKEN_TO_BE_REPLACED

Happy Christmas everyone! There will be a flurry of posts soon, which have built up over several weeks of being too busy. They will include some fantastic news.

Here are some initial interface wireframes for the iPod Touch remote control. I’ve not shown all of the menus because that would be quite a bit of work. These three should give you an idea of what I intend to do though.

The main menu summarises the major systems of the house. Clicking on one of the buttons takes you to more controls for that system. The colour of the buttons indicate the overall state of the system – green = OK, yellow = warning, red = error, grey = disabled. 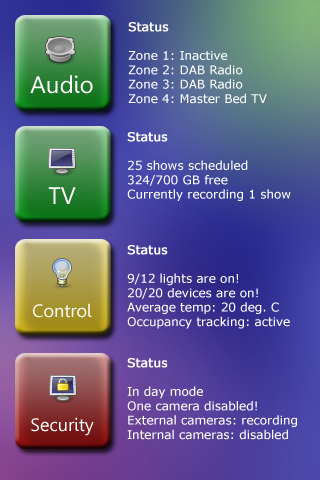 The audio controls will list the 4 zones, with a drop-down menu next to each button to select the audio source. Clicking the large button switches the zone on or off. Pressing the ‘Use for all’ button copies the settings of the selected zone to all the other zones. 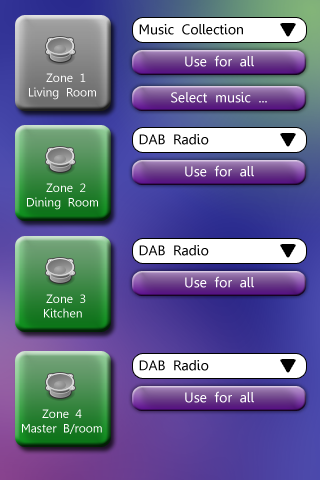 The large buttons display a thumbnail of the live video from the cameras. Clicking on the large button will show the full video feed (resized to fit the iPod’s screen). Cameras can be disabled for privacy. 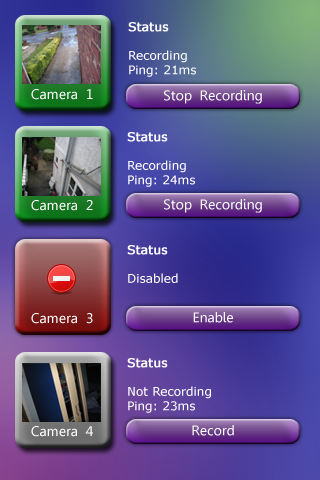 Whilst pondering over what sensors I could put around the house, I ventured upon the idea of having a ‘sensor box’ per room. This would be based upon something like the Netiom xAP, which would connect various sensors to the house’s IP network. Some of the sensors in each room would be different. Here are some examples of the sensors that would be common to all of the rooms:

Room specific sensors could be:

Each of these nodes can then be queried, via the xAP protocol in this case. Temperature could be recorded, although at present our combi-boiler would probably not allow for remote control. Motion detection and door contacts can be used to determine which rooms are occupied, and along with the window sensors could be used as a secondary security system. The light sensors would be used to control the house lights.

Having one single ‘node’ to talk to would do away with having lots of independent sensors that would probably all communicate differently. Thanks to having picture rail throughout most of the house, there won’t be a problem with hiding the wiring. I’m not sure how big the boxes would be, but I dont think they would be massive. I just need to find the money to build a prototype. 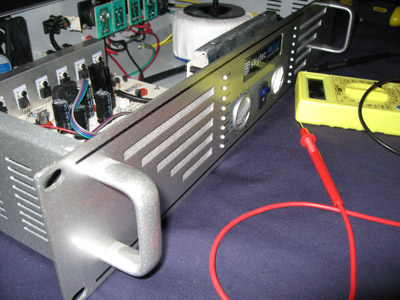 Today I took a look at the damage caused by last weekend’s test of the matrix switcher prototype. I suspect that the cause of the bangs was actually a short because in my haste to test I’d only connected one channel to a speaker and left the other with bare ends – oops! 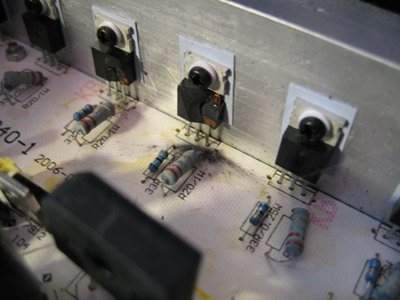 Removing the case revealed that the damage appears to be limited to two transistors on one of the channels. I’m not the only person who’s tried to fix this model of amplifier so a quick search for the numbers written on the remaining transistors revealed the information I needed to order some replacements. The parts have been ordered, so will hopefuly arrive before Christmas, although delivery times recently seem really slow.

In the same way that the saying “you’ve got to spend money to make money” works, sometimes it’s also necessary to spend energy to save energy. An automated home may have more gadgetry than normal homes, but if set up correctly these little power-consumers can help to save energy. While the debate about whether the apparent global warming trend is the result of our actions, it can’t hurt to try to reduce energy use (or rather, conversion) as much as possible.