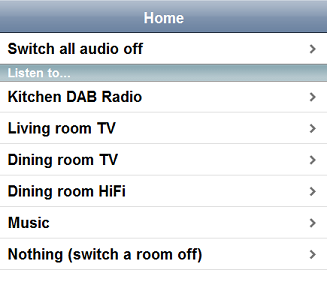 Yesterday I completed and successfully tested the control software for the audio system. The software works with the matrix switcher and the APC MasterSwitch remote control PDU to allow the audio output devices around the house (TV, radio, CD player etc.) to route their sound to any of the 4 audio zones.

I’m now waiting on some more purchases from eBay to arrive before I can finish the system off. On the way is a small touch-screen monitor and a low-power mini ITX computer to connect it to. This will function as the controller and will probably sit in the dining room at the centre of the house. I’ve not gone for an iPod just yet, since a small mobile device has the possibility of getting lost or damaged more readily than a fixed controller. I’m looking out for a cheap 2nd hand one on eBay though.

Although I had got the software working yesterday, I foolishly installed some updates for Ubuntu and now the serial ports have disappeared again. Rather than battle to get the ports to show up and behave I’ve gone a little more eBay crazy and bought a second thin-client-like low power PC which will run the matrix control software and possibly the web server for the front-end control interface.

The other remaining tasks include creating some more cables and positioning and attaching the speakers for zone 4, the master bedroom.

Full details of the setup, with a video, will hopefully be posted in the next few weeks.