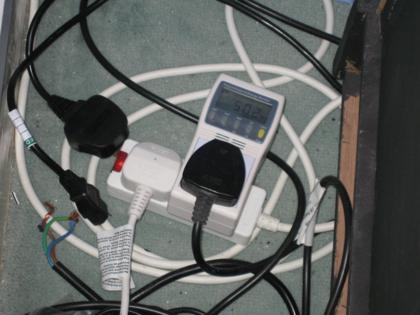 A recent electricity bill has prompted me to investigate how much power is being used by each device in and around the cabinet in the hope of figuring out what can be replaced to reduce running costs. I’ve had a power monitor from Maplin for a while, but most of the time it’s been monitoring total power consumption of the rack.

The audio system components haven’t been measured yet because at the moment they aren’t ready to drive a load and measuring the idle consumption wouldn’t be very meaningful. The amplifiers will be switched off when not in use and won’t be used that much compared to the items listed above.

Based on the data above, I have replaced the 3 switches with 1 switch. I have been investigating replacing boron with a collection of NAS devices for storage and a low-power ITX-based machine for services such as DHCP and DNS. However this is currently quite an expensive option.

Aluminium is a gaming-spec PC so will always consume quite a bit of power, however I’ve got some software under development which should mean that I won’t need to keep it on to download the occaisional torrent – that job could be offloaded to boron or my hosted server.

Barium is only on when I want to watch a DVD, a video or recorded TV from MythTV. It was specced to be quiet and consume as little power as possible with a Core 2 Duo CPU, 1GB DDR2, a passively cooled HDCP-capable VGA/DVI graphics card and a quiet PSU.

I’m going to continue to look at reducing consumption not just in the rack but around the rest of the house.

One thought on “Measuring power consumption”