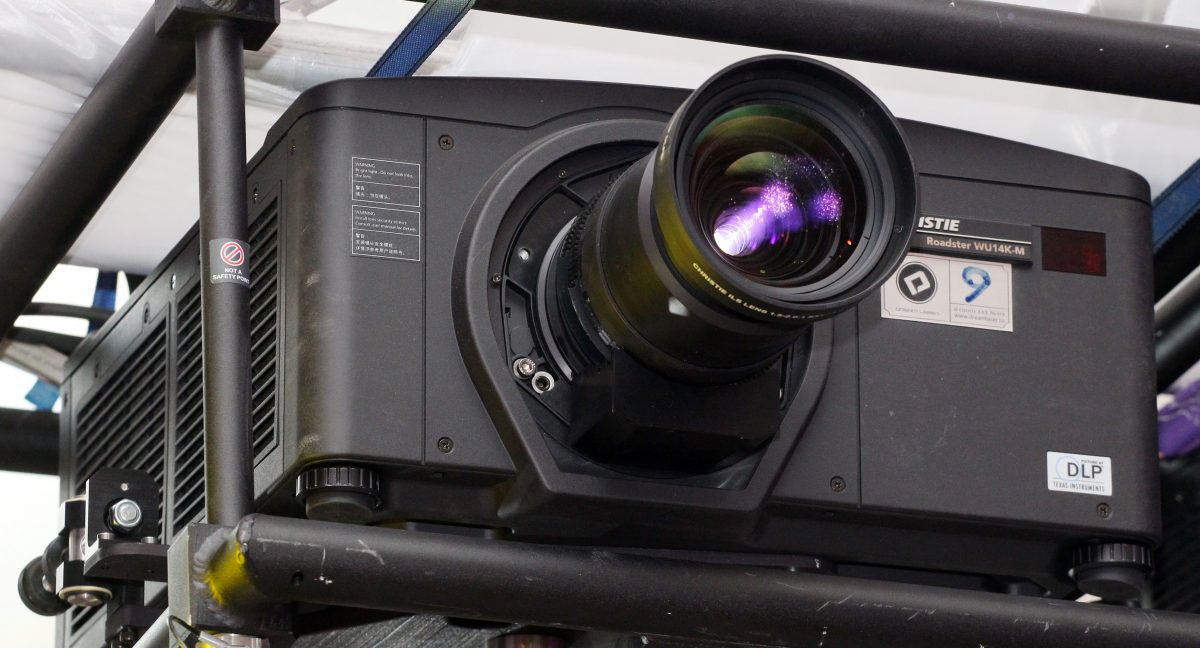 The selection of projectors can be daunting. There’s the choice of the engine used to create the images, various light source technologies, the brightness of that light source, and long, standard, short and ultra-short throw lenses. This is a brief guide to help you understand these options when you’re looking to use projection in a theatre.

I don’t think anyone seriously uses this any more, but it used to be the staple of video projection. Let’s gloss over this one.

This succeeded cathode ray technology when full-colour LCD panels had become sufficiently advanced. They can suffer from slow latencies, resulting in ghosting for rapidly changing images. They also absorb a significant amount of the light whilst simultaneously being sensitive to excess heat, imposing limits on the output brightness.

Consisting of a chip covered in tiny mirrors which the light source is reflected off, light loss is greatly reduced over LCD and heat build-up is not so much of an issue. Projectors tend to have either 1 chip, in which case a colour wheel is used in combination with persistence of vision to provide the illusion of full colour, or 3 chips for red, green and blue channels that are then combined in a prism.

For theatre use, this type of display engine is probably your only viable choice.

With huge amounts of light output, but corresponding amounts of heat and power requirements, these lamps create an electrical arc between electrodes in a high-pressure gas (normally Mercury vapour, but sometimes Xenon) environment. They are the most common type of lamp in today’s video projectors.

LED technology is advancing rapidly, and not only as a projection light source. From household GU10 bulbs to theatre lighting, LED (Light Emitting Diode) technology is replacing filament/incandescent bulbs. They have historically had a poor colour gamut, but combinations of many different colours, about 7 rather than the normal 3 or for in RGB/RGBW, are now allowing their use as light sources in projection with relatively high efficiency.

Cheap, tiny ‘Pico’ projectors use a small LED light source to project a small image, suitable for a small audience gathered around a mobile device for example. Larger projectors with LED sources are rare, but are slowly growing more common.

The two main advantages of LED over discharge and incandescent lamps are reduced power/cooling requirements and longer lifespan.

If you can absorb the slightly higher cost compared to filament lamps, and find a projector bright enough for your needs, and you intend to use the projector fairly often, then you should consider an LED projector.

One of the newest technologies in projection light sources, Lasers have the same advantages of LED illumination of higher efficiency and long lifespan. They are capable of higher brightness than plain LED, though, so allow for a similar brightness to high-output filament but in a smaller package. Projectors featuring this light source are marketed as providing greater clarity and contrast than other technologies.

Unfortunately, while early prototypes may have implied the possibility, most if not all commercial offerings do not produce a coherent light beam which would otherwise eliminate the need to focus the image.

While a great deal more expensive than other options, if you want quality and longevity with minimal maintenance, then you may want to consider a Laser projector for your theatre needs.

Office and home projectors don’t normally need to be that bright – you can normally create a dark environment in which to use them, or at least reduce the ambient illumination. However, lighting tends to be quite important in theatrical productions.

Any projector that is to be used on stage must be able to out-shine the normal stage lights that are being used to make the actors visible and provide atmosphere and special effects. The illumination capabilities of the projectors are therefore one of the key deciding factors on which models to use.

The brightness of projectors is normally measured in Lumens. The brightness you will need will depend on how large you want your projected image area to be, but in general you shouldn’t opt for anything less than 3,000 lumens. This will allow you to project an image of a couple of metres or so in diagonal on a low to medium-lit stage. To cover a larger area of, say, 10m x 6m, on a lit stage you will need a much brighter projector – as a rough guide, at least 10,000 lumens. A well lit stage may need closer to 20,000 lumens.

It’s sometimes possible to use a technique called stacking, where multiple projectors are physically stacked one on the other and focussed onto the same area, to increase the brightness of the image. Careful alignment is required to avoid making the image appear blurry, and the perceived brightness will not increase linearly with the number of projectors due to the way that the eye interprets brightness. It is, however, generally cheaper to use multiple lower-brightness projectors than it is to use one projector capable of the same total brightness.

Brighter projectors are also larger, so your the brightest projector you can use may be limited by physical space more than budget.

In summary, get the brightest projector combination that you can afford and  physically fit into your production.

All projectors require lenses to focus the image onto a surface. Like camera lenses, projector lenses are limited in the focus depths that they can achieve. Some projectors, generally the large installation projectors, allow you to have interchangeable lenses but in general you need to decide upfront how you intend to use the projector and how far from the projection surface you will be using it.

If the projector is situated at the back of an auditorium, you will probably need a long-throw lens attached. This creates a narrow beam of light so that by the time it has travelled the required distance, the projected image is still a sensible size and a reasonable brightness. In general, these projectors are intended for large image sizes, and hence are more commonly found in the installation market with high-brightness light sources.

Standard office projectors mostly come under this category, where the projector may be several metres from the projection screen. If you have a large stage and want to site the projector in the flies, then this might be a suitable option.

This covers some office projectors, where the projector will be 1 or 2 metres away from the projection surface. This will be more useful for smaller stages.

A niche product, UST projectors are normally used for projecting onto whiteboards from very short distance of > 1m. They normally produce an image up to about 100in/2.5m diagonal.

On stage, they can be extremely useful for projecting an image onto a nearby surface without the risk of actors casting shadows. You could, for example, mount a couple of projectors to a 10’/12′ flat and project directly onto that flat.

You cannot normally stack UST projectors for greater brightness because they tend to throw the image ‘back’ over the body of the projector rather than out of a lens on the front.

Due to the deliberate extreme distortion created by these projectors, they are limited to projecting onto flat surfaces at 90 degrees to the base of the projector. The surfaces must be free of defects, as even the smallest bump can create a noticeable bright/dark spot.

It depends on your application, but in most cases, DVI and HDMI will suffice. If you have the infrastructure for SDI, then some of the larger projectors provide this option. Analogue inputs are largely deprecated now, but are still present on the smaller office/home projectors.

Many installation projectors now feature this standard, which allows digital video and audio to be transmitted over long distances over network-grade cabling. It’s great for use in a theatre as it replaces the need for long, expensive runs of HDMI, DVI, SDI or optical connections. If you’ve already got a CAT5/6 network infrastructure in place, all the better. Note that this does not mean that you can use an IP network to send the signal, it just uses the wiring as a direct path between the transmitter and the receiver. This technology supports HDCP and high resolutions currently up to 4K. CAT6 and higher spec cabling is recommended.

Some installation projectors include an RJ45 port which may be connected to an IP network to permit remote control of certain functions. The range of functions available will vary depending on the product, but many of them support the PJLink protocol standard that allows compatible software to control basic functions like power on/off or a douser.

In a theatre context, this could be a useful feature to conserve lamp life and minimise power usage by switching off the projector remotely when you aren’t using it. There are tools like Projector MIDI Remote which allow you to control projectors from applications like QLab.