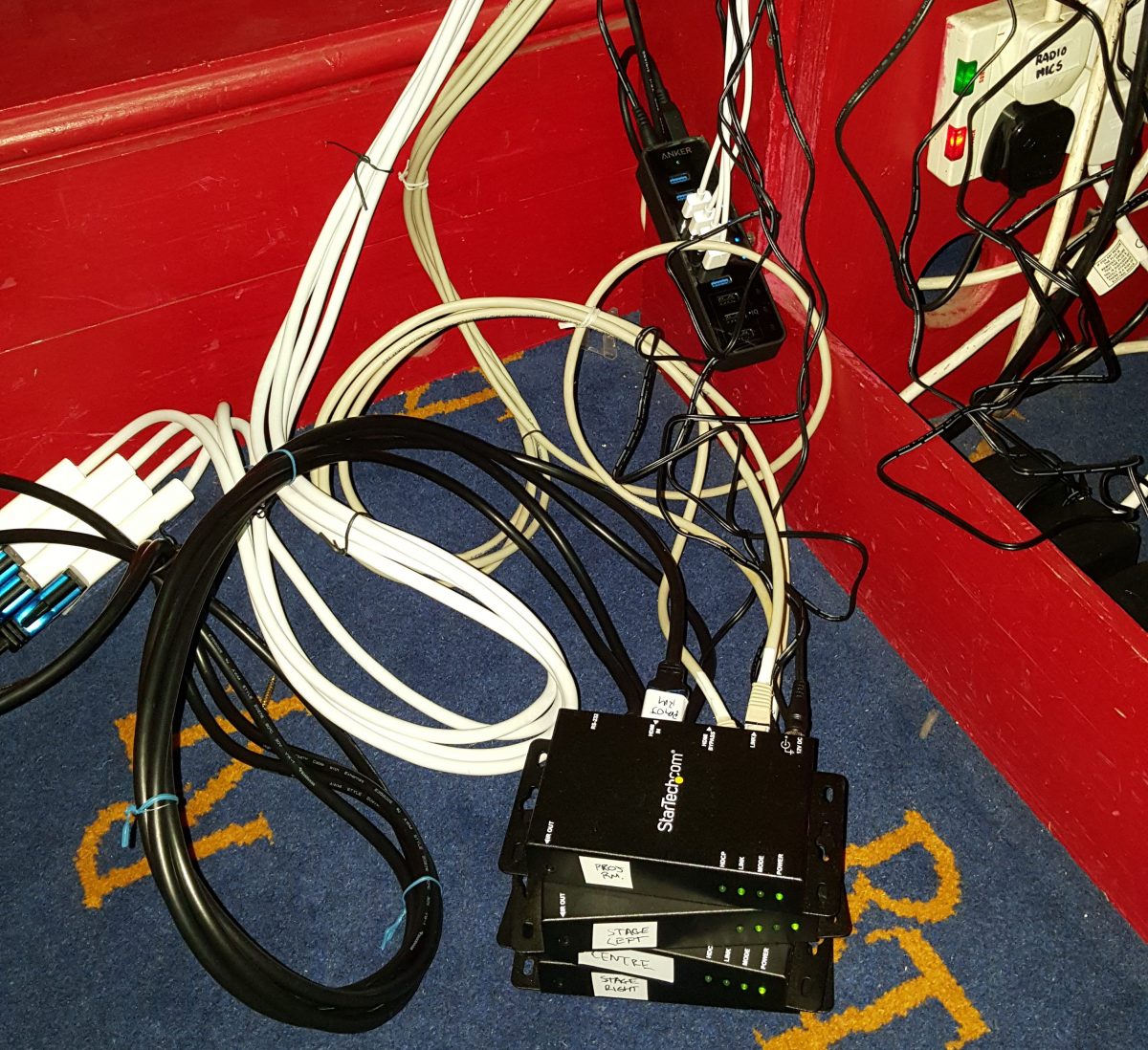 TL;DR: If you are intending to use more than 2 video outputs (either HDMI or DVI) on a Mac Pro (in this case, the Late 2013 version) then in addition to using active DVI adapters (as specified in this Apple KB article) you will need to ensure that there are powered-on devices on the other end of all of those adapters.

When recently setting up a Mac Pro to power a total of 5 displays (1 local HDMI monitor and 4 remote projectors), I encountered the very worrying problem of the machine freezing every 5 or so seconds for approximately 5 seconds each time. This was a completely new machine, and it is also the first time that such a multi-display setup was attempted, so I had no idea what was going on.

At worst it could be a hardware fault in the Mac Pro, which would be pretty disastrous considering the time-scales involved on the project in question. Alternatively maybe it was a driver problem, or one of the adapters was faulty. Everything worked fine when only the HDMI monitor was connected, directly to the on-board HDMI port.

An extended trial-and-error process of connecting different combinations of the DVI adapters eventually revealed that the machine would only work correctly with none of them attached. However, there were no devices attached to the adapters, which one would not normally consider a problem from prior experience of multi-monitor configurations – after all, it’s normal for spare display ports, analogue or digital, to be left unconnected without any problems on the various PC systems I have access to or my work’s MacBook Pro.

Attaching dummy loads – a spare projector and a TV – things began to stabilise. If left alone with just 2 DVI adapters both with powered-on devices attached, the Mac Pro and displays were fine. However, if the projector or TV were disconnected and reconnected to the adapters, the graphics subsystem would appear to crash on the remaining additional output, leaving a static-like image in place of the expected desktop. Similarly, if additional DVI adapters were connected to the Thunderbolt ports, things would destabilise resulting in the Mac locking up for several seconds and occasionally the connected displays losing sync or displaying the ‘static’ haze.

Eventually we had enough devices to be able to test all of the active DVI adapters at once, and were relieved to discover that all is well when everything is connected up and powered on – at least the show could go on if everything was fully connected and not touched. The ‘static’ issue resolved itself once we stopped using the spare projector, which is relatively old and may have a firmware issue with HDCP negotiation. The hanging problem still occurs if some of the connected display devices are powered off or disconnected, but there is comfort in knowing that in a normal state it will resolve itself.

Additional Cause of the Hanging Issue

While researching this problem, an article on a 6-monitor setup yielded a possible cause in the first comment – a poor supply current through the USB hub, or other USB problems, can cause the adapters to malfunction. This was ruled out by replacing the new high-power USB hub with a known-good older one, experiencing the same issue. If you’re going to attempt more than 2 monitors, it’s worthwhile investing in a high-quality, mains powered USB hub. This recommendation is included in Apple’s KB article.