The SqueezeBox series of devices from Logitech has got to be one of the best media streamer ranges out there. Not long after I moved into my flat I bought a SqueezeBox Boom and it is awesome. Fantastic audio quality with an almost impossible amount of bass from a small single-unit stereo now sat next to my bed. 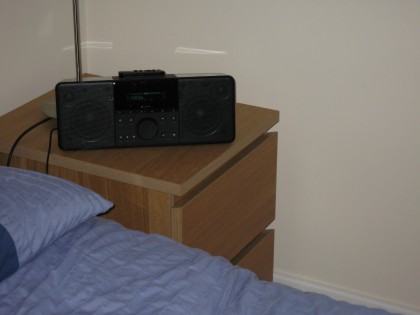 The downside to the SqueezeBox devices is that the quality comes at a price, one which is impossible to justify at the moment. However, it happened that the following year O2 were having a fire sale of their Joggler device. I snapped one up for the bargain amount of £50 with the intention of using it as a home automation controller.

Well, the automation dream also comes at an even less justifiable cost and so the Joggler has been sitting idle in a drawer waiting for a project to bring it back to life. Thanks to the UKHA mailing list it now has a purpose. My Joggler has been reborn as a budget SqueezePlayer having followed some really easy steps.

With it connected to my surround amp, I can now stream music from my existing SqueezeBox Server and even control it remotely with a web browser. One less bit of idle kit, one new feature, and at £100 less than it would otherwise cost. 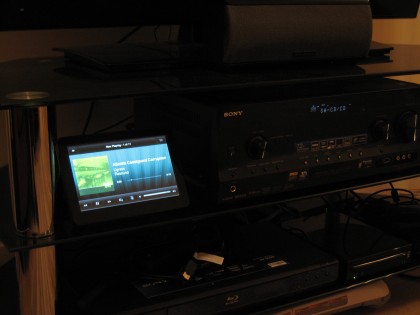 The Joggler is a popular device for customising, and there are Ubuntu builds available for it (rather than the onboard O2 OS). If you want to play with one, they are no longer available for sale from O2, so you will need to look on eBay or similar.

I felt the urge today, as happens every now and again, to add to my music collection. Up to today my collection has consisted only of CDs, which I’ve ripped to MP3 for playback on my computer and my iPod. While I was looking around for albums to buy, I checked out Play.com to see how their prices compare to Amazon for some of the rarer albums.

Most of the albums I were after need to be imported, but earlier this week Play launched their own DRM-free download service. I managed to buy 3 albums by Ugress for £1.95 each! Up till now I’ve avoided download services because for only a few pounds more (or even a few pounds less) I can have a physical CD to serve as a backup and something to look at. The bargain download albums I found were just too good to pass up though, and since they are DRM-free I’m not restricted in any way with how I can play the tracks.

To keep the tracks safe, since there isnt a CD version, I’ve added them to their own folder on my fileserver. This folder will be added to the backup system, so they will be included in the daily tape backups.

Purchasing the albums is no different to the normal process on Play, and I included some CDs with my order that should arrive in a few days (Morcheeba – Dive Deep, Plaid – Spokes, Plaid – Rest Proof Clockwork). After going through the checkout process, the confirmation screen is slightly different and 2 emails are sent – one for the physical goods and one for the downloads. A list of all purchased tracks is available in the ‘My Account’ section of the site, where the tracks can be downloaded individually or in one big zip file including album art.

Downloading of the zip file is streamed, so you don’t get any indication of the size of the file as it is downloading (since the size of the file is not known when the HTTP response headers are sent) but the speed was pretty impressive. I got 1MB/sec+ (not Mbit – I’m on a 20Mbit connection) which would probably have maxed out my connection if I weren’t downloading/uploading other things at the time. As the popularity of this service increases, I suspect that the download rates will drop in a similar way that iTunes-hosted downloads can sometimes slow to a crawl.

One criticism of the ‘download-everything’ zip file is that the tracks are not separated into directories, so I had to manually separate out my 3 albums. This could be for some compatibility reason, or just that the developers didn’t know how to add folders to a zip file. I’ve programmatically created zip files at work using SharpZip, and the process of adding folders is not as straightforward as you might expect.

Overall I think the service is great value for money. It competes well with iTunes, at 9p cheaper per track and with some real bargains for albums if you look around. The Play site could still do with a few extra features to make browsing a little easier, such as deeper categorisation, easy access to albums by artist, the ability to order by price, and the ability to browse categories rather than just getting a summary of what’s popular, new etc.